Hello there November, I found this story told by the Argentinian psychologist Jorge Bucay and I find it motivating, so here it is:
Be a Freesia

The king asked:
– How is it that you grow healthily in the midst of this withered and gloomy garden?
– I don’t know. Maybe because I always assumed that when you planted me, you wanted freesias. If you would have wanted an Oak or a Rose, you would have planted those. At that moment, I told myself: “I will try to be a Freesia the best way I can”.

Now it is your turn. You are here to contribute with your fragrance. Simply look at yourself. There is no possibility that you can be another person. You can either enjoy being you and grow watered by your own love for yourself, or wither condemned by your own sentence… 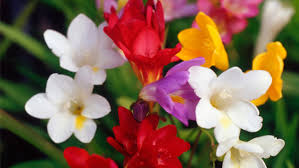