yes, I haven’t had any coffee or sugar- almost since yesterday afternoon. I guess the 3 coffees I had in the morning decided me to act. Now, I only ate salads and lentils from the Organic store next door. And a healthy orange-apple juice.

Do you think I can resist long enough? We will see. I thought two days is a good period of time to begin with. In any case, I don’t want it to fill like a punishment.

I thought that I deserve to take it slow and to recenter myself instead of stressing that with my book publication I left behind the current affairs in London.

I can do it! But I need to show myself some kindness in order to be effective.

After all, tomorrow is my 2 year Blog Anniversary and I want to celebrate!

YOU-app with Jamie Oliver Review: Self-help one ‘micro-action’ at a time

after the excitement of my first book launch in my French village, and all the Easter chocolate, this is the day for a serious Detox! From anything I have been doing these last days, before I start again.

I am back in London, and it feels like a lot of people have not returned yet, probably those who have children benefit from the long Easter week end! So what should I do? Eat rice-organic Easter eggs instead of real full of calories chocolate? Sleep? Visit a new place?

Ok sleep more is first in my list. But I also feel the need to read something new. Something I know nothing about.

And a tisane, or an herbal infusion with something extremely detoxing.

And Yes, the presentation of my first book took place in my village of the South of France, at the local bookstore!

It has been a big local hit: 55 books were sold on the spot!

Ok, half of them went to aunts and uncles, former boyfriend of the time I was 8 year’s old; others to former neighbours who were curious to see if they would learn something about my personal life all these years far from the cafe and the village church. After all, I am a village celebrity 🙂

And yes, it is practically a self published book because if I sell the 200 books we have edited I will end up with a profit of 200 euros.

But it meant a lot to publish in my mother tongue first and to do it there where my life started.  Even if at my little village -we call it small town- there are also those who forced me to get out and seek adventure in the wide world.

Now I feel kind of exhausted at my village café. It feels like, whaou, there were about 100 people there who seemed to be interested in whatever I have produced. Even if I have my blog-friends who are there with their inspiring comments, it is great to have humans with flesh and blood being present.

The next step is to see if they enjoy it as much as I did writing it!

And of course, to translate it!

How to Use Twitter to Supercharge Your Book Launch

I am practically speechless, grateful and excited: my first book’s presentation is taking place in 3 days at my hometown!

Goodby London -for a week-, I am going to the South of France to the small local bookstore around the corner!

here we are, close to the middle and I am running around like crazy with all sorts of errands… and my romantic life would need brighter colours now that spring approaches!

Yesterday I went for a drink with one of my new friends in London. He comes from Lille, a city in the Northern part of France and he has moved to London almost at the same moment as I did. This fact brings people closer, at least in order to talk about life. In his case, he is dating a girl from New Zealand he met through Tinder, the online dating platform.

He works in informatics and doesn’t have a lot of time to meet new people. In any case, he advised me to do the same. Of course, he couldn’t admit how irresistible I am and how unworthy of me he felt the poor thing.

In any case, I don’t know if I will take his advice. For the moment, I will try to find out how the locals, the Londoners do things, starting from my social circle.

Do you have any advice on the question?

Do you think online dating can be a positive experience if you are looking for real connexions with people? 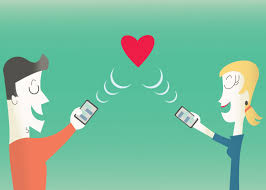 so have we mentioned that it could feel uncomfortable out of the comfort zone?

I have experienced this feeling as I was letting my big mouth run away and state opinions in front of a group of people I never met before. They were so surprised with my comment, it was as if they were facing an alien for the first time. So they left my comment-question without answer or discussion. I felt a bit uncomfortable because I was vulnerable and exposed. At the same time I felt kind of ridiculous.

Was it dangerous? Well I am still alive.

How about my reputation? After all, these people are remotely connected to the art world. What if they take me for a fool?

Well, I could have kept quiet, yes I could. It kind of reminded me of times I were still at school, or at my first years in the University. When I took the courage to raise my hand and ask, and sometimes, my question was not very well received by my teacher or professor.

In any case, should one open one’s mouth outside of their comfort zone, should I risk the ridicule?

Where is the frontier between courage and foolishness?

I am at the second half of my challenge to change myself and it seemed a good idea to take this test which measures my comfort zone. The questions concern adrenaline raising experiences but also relational, professional and other dimensions of our life. I scored 63,9 % .

If I break the score down, I take a lot of professional risks, moved to a new country, … but when it comes to more relational, like creating a family my score is less high, not to speak of adrenaline seeking experiences… diving, …I let you imagine.

So, should I challenge myself this way?

After all, the publication of my first book in France is already a challenge.

Couldn’t I concentrate on this? After all, this is my biggest heart’s desire.

How about relationships? Trying a long term relationship with someone in the same country or city? A friend of mine suggested I tried TINDER although I am not sure he is an exam

Or getting up early in the morning for a change?

I read in ELLE UK that Debbie Morgan, a columnist, took 30 day challenges for a whole year. It this an interesting tool?

Would you have any suggestions? 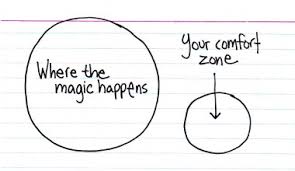 should we rely on our partners on certain questions or not? There used to be a model where women were to stay at home and raise the children; so men were to deal with the family income and they relied on women for everything else. Later, they both work, or both partners are unemployed. And they both take care of the children or … or… or…

Is it reasonable to rely on someone else for certain questions?

Or being an adult means that each person should look after their own needs at 100%?

And before you have a family, at the level of the couple: would you, if you were a woman, like a man to invite you to dinner? Or would you consider it “passé” and invite him? Or split?

Hello March, the title is ment both as an incentive to fall in Love yet another time, for those who are out of love, but also, speaking of Love again, after the Valentine’s amorous period.

I don’t know exactly where I stand myself, regarding love feelings. At least that is what I have told my “compatriote” from the South of France who happened to be passing by for business purposes. We went out for a drink to catch up since he is returning to France tomorrow.

He told me how lucky he feels, to be In Love again, so soon after having broken up from a former girlfriend. They had been together for years, and despite feelings of love, they didn’t see life in the same way. It was mostly her decision and a month ago we were still speaking of his ex and his feeling of loneliness. Now, his face was shining. The new person in his life is someone he had already met through a group of friends. He thinks there is a connexion between them she is the “one”.

But this was not the first time I heard a love story today. This is why I say, Love Again.

This time, it is the love affaire of a woman who should be about 75 year’s old. She is an old school teacher with whom I have kept in touch. She told me that when she met her husband at University, in her early twenties, he was in a rock band: she fell in love instantly. They were still together until he passed away, last year. And the last time I saw them together, they seemed to be a loving couple, and two wonderful people.

I don’t know if my first friend is right about his new partner. I hope he is. But I would definitely like to end up in a couple as the one of my former school teacher.

Do you think we can fall in Love Again? And are there Love Stories that last a life-time?

I am so very happy because my first book in French, will be out soon! It is practically self-publishing but we shqre some of the expenses with a small family publisher from my hometown in the South of France.

And there is a presentation involved at the local bookstore!

It might be a small step towards the realization of my heart’s desire, but a very significant one.

Writing has been my almost favorite activity since I were a kid. During my adult years I found myself in the art-world in Paris, organizing exhibitions for a Platform. This is very interesting but I got stuck with a wannabe boss and not a very creative environment.

Was it the decision to move to London which triggered the change? I somehow decided to act and publish my first novel. The family publishing house could be a small dot in the publishing world. And my book like a message in a bottle.

But when someone opens it, a story told from the heart might pop up 😉