do you know anything about men-women relationships? It could be very cultural, but it seems to me the people I know -at least in Paris- nowadays, are lost in different dating codes.

In the conversation I had with a guy yesterday, he insisted that women are supposed to decide if they want someone, and do everything to pursue him: follow him, jump on a plane to meet him for two hours in another country, go knock at his door even if he is living with another person.

After having watched a number of romantic films, or maybe because I have a traditional side, I like the idea of the guy doing also something to pursue me. According to my friend, this is a problem. I am not decided enough to go all the way and get what I want.

I wouldn’t like the opposite picture, where the woman is a damsel in distress, and the role of a “real” man is to rescue her or to chase her for two hours, if it is an old film. Unless if we talk about our attitude, our decision: do I want to be with this person, or not?

But is real life like a film? Aren’t relationships inter-actions where actions get their meaning from the context, the moment, the flavor?

what did you say? Yes, I like Harry Potter. I have read some of the books and watched some of the films. I love fairy tales, and this one has a very good psychological background, it seems to me. So here is a quote from its author, to inspire our day:

“I was set free because my greatest fear had been realized, and I still had a daughter who I adored, and I had an old typewriter and a big idea. And so rock bottom became a solid foundation on which I rebuilt my life”.

Now, the way I understand it, is, if we have something we love to defend, and an inspiring idea, this is all we need to act. Difficult circumstances become a sort of emergency: if I don’t move now, something very valuable to myself and others will be lost. This is the moment! Cease the day April! 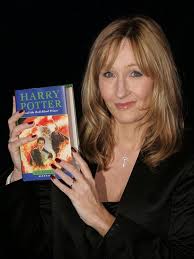